It will be recalled that in August 2016 Douglas Borough Council disposed of six historic Horse Cars by offering them for sale at auction. Assurances were given at the time, that the cars were to be passed to ‘organisations or individuals willing to commit to their preservation.’

Of the cars sold at the auction, open toastrack tram No. 39 was secured by the Manx Electric Railway Society, and is stored safely undercover on the Island alongside sister car No.40 which has been privately preserved. Bulkhead car No.37 was acquired by Chief Minister Howard Quayle and it resides on his farm at Crosby.

Whether 112 year old Car No.34 has been acquired by “organisations or individuals willing to commit to their preservation” is now certainly open to interpretation. 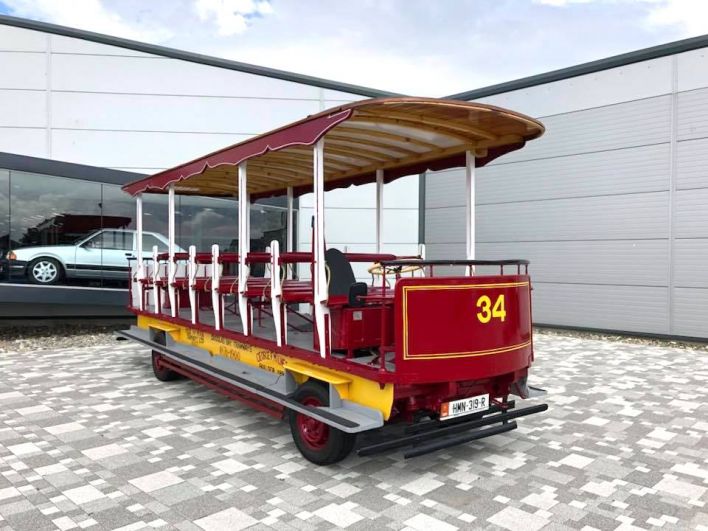 The butchered remains of former Douglas Car No.34 sit outisde the
Isle of Man Motor Museum at Jurby during July 2018. (Photo: Jack Slaughter)

Recently the body of this 1896 Milnes built tram was seen on the curtilage of the Isle of Man Motor Museum at Jurby; it now appears to be a Chimera having been removed from its original running gear and is mounted on a chassis fitted with rubber tyres presumably to permit operation along the road. What remains of this unique and ancient tram has been fitted with a steering wheel, curved dash panels and seatbelt for its driver.

Other than that we now know that the Isle of Man Motor Museum at Jurby is collaborating with the individuals responsible for this vehicle (it is no longer a tram) and has accepted it on loan, the ownership, intended operation and method of propulsion are presently unknown.

The decision of the Isle of Man Motor Museum to collaborate in this venture is to be deplored.

The Manx Electric Railway Society has sought to protect the horse tramway throughout its 45 year existence and cannot condone this and suggests that all right thinking people should search their consciences before lending any support to the Museum in question. Tram 34 is a Manx Icon which has been effectively destroyed as a gimmick. The people who have done this appear to have done so to create a crowd pulling freak and should not be given the oxygen of publicity.

Of the other cars sold at auction, Saloon car 28 has recently been moved, its destination unknown although rumours suggest it could have been heading for the Lancashire Coast or Yorkshire. Bulkhead car No.33 is believed to still be on the Island. Any information regarding the whereabouts of either car 28 or 33 would be gratefully received. 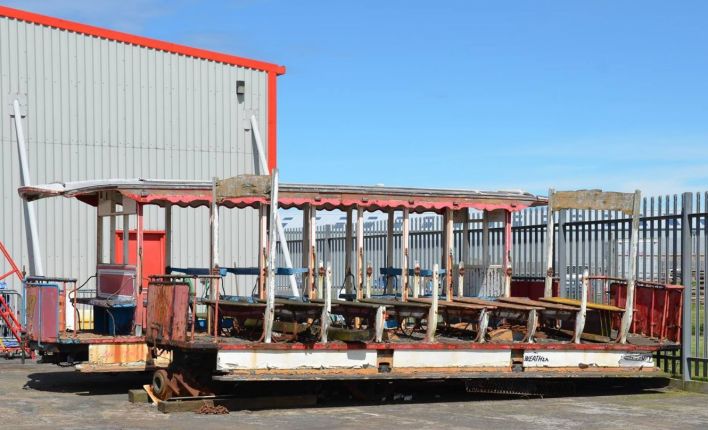 Douglas Borough Council has a long, well earned and unenviable reputation when it comes to the preservation of the priceless relics in its care. Cars No. 11 (built in 1886), the oldest surviving horse tram built for the Isle of Man, and Bulkhead car No.47are both still owned by the Council, have been left dumped in the open to rot behind a Museum in Jurby for years. Is this their idea of“organisations or individuals willing to commit to their preservation” ? (Photo: S. Godber)

All of this calls into question the following;

Background Information
Originally formed in 1973, the MANX ELECTRIC RAILWAY SOCIETY is charged with the express purpose of protecting and promoting the retention and development of the MER and other Island tramways at a reasonable cost. It successfully campaigned for the reinstatement and re-opening of the Laxey - Ramsey section of the MER during 1975-77. The Society became a Registered Charity in 1978.

The Society proposed the 1993 “Year of Railways”, a series of events to mark the Centenary of the MER. Initially brushed off by management who had planned “a special tram with some ham sandwiches”, the Society persuaded politicians who in turn put pressure on Isle of Man Transport and the opportunity was eventually embraced, producing some 25,000 extra visitors during the year, and inspired a series of follow up events throughout what was left of the 1990s.

In February 2015, the Society officially launched its new website, designed to complement the magazine with historical and political content aimed at promoting interest and retention of the MER, and featuring public and members only pages and online membership to extend further the reach of the Society to a worldwide audience.