One of the priceless Milne's Winter Cars of 1899, the mainstay of the M.E.R.'s year round services was destroyed by fire. This is how the MERS reported the sorry tale in Manx Transport Review. 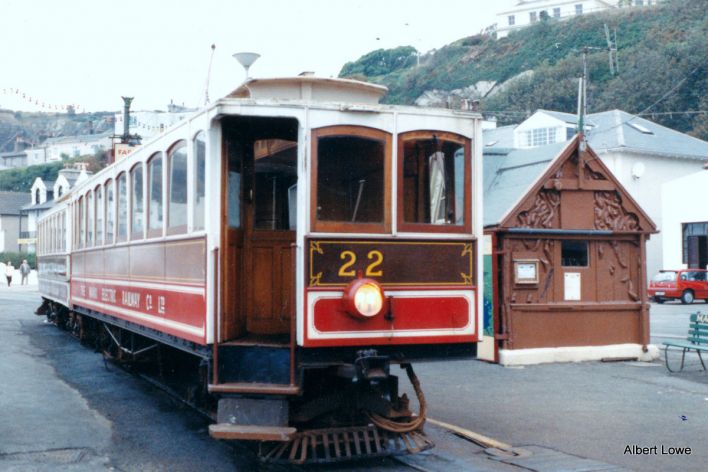 Car 22 which is coupled to Winter Trailer No.57, is pictured at Derby Castle shortly before setting off on its fateful journey on Saturday 29th September 1990. 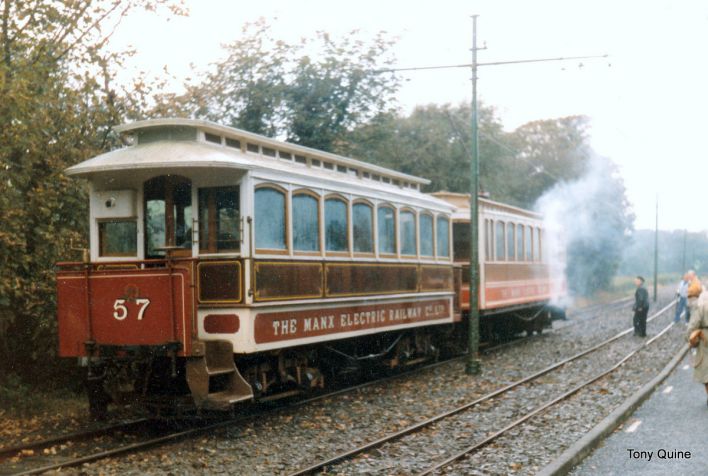 Some 20 minutes later at Lhen Coan, smoke is seen billowing from the resistances. The passengers who were mainly German tourists on the Everyman F.F.O package, have been evacuated and look on from the roadway. By this time, the car’s saloon had filled with smoke, and attempts were being made to extinguish the small fire. 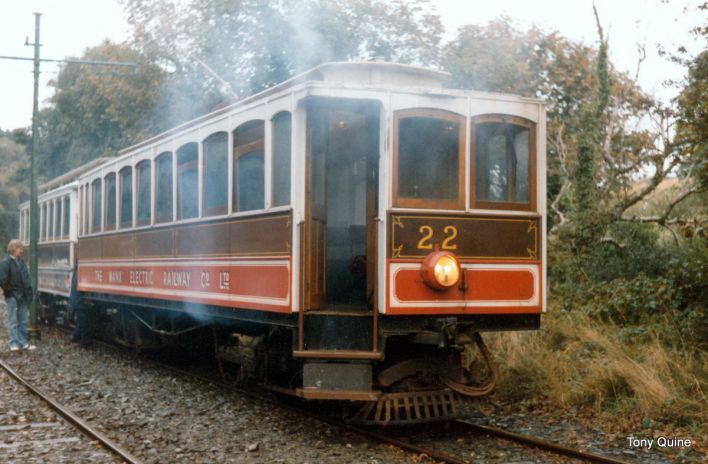 No.22 met her end on the evening of Sunday 30th September 1990. No.22 had last been in service on Saturday 29th September and had been left at the back of the 'hospital road'. As usual, the trolley was off the wire, and the car was effectively, electrically dead. The tram had been completely refurbished over almost a two-year period, and had been back in service for only 5 months. The new roof fitted to the No.1 Car Shed has likewise been severely damaged, and was once again open to the sky. Also in the shed during the blaze was sister Car No.19, undergoing repairs and minus its Douglas end truck, and semi permanent resident of the 'hospital roads', No.17, a Milne's Crossbench Car of 1898. Car 19 suffered minimal damage to its trolley, whilst No.17 which was alongside No.22 as she blazed, was badly scorched.

The fire broke out shortly after 7.30pm on Sunday evening. Automatic fire detection equipment was activated by the smoke, and the alarm was raised. Firemen from Douglas Brigade were in attendance for nearly 5 hours. Breathing apparatus had to be used to gain access to the shed, and it took almost half an hour to extinguish the flames. The following day, distressed employees at Derby Castle began the work of salvaging ironwork from the car, and loading the ashes and charred wood into a skip. The car has been moved from number 1 'hospital road' to number 3 'hospital road' where the remains will be finally broken up.

The fire started in the Ramsey end saloon, which has been completely destroyed. The roof has gone, and the trolley pole now droops hideously deformed onto what was once the saloon floor. The partition which once separated the 'Smoking' and 'Non-Smoking' sections held back the flames from the Douglas end for a time, finally giving way and allowing the flames to savage the rest of the car. The Douglas end switchbox was virtually undamaged. The car body was effectively completely destroyed and was later broken up in situ. The condition of the car's underframe and trucks/motors was not known at the time of going to press, though the damage to the trucks seemed to be at first sight to be superficial.

Also damaged is the new shed roof. Plastic skylights have burnt and melted, allowing the rain to once again pour in, and the plastic coating on the galvanised steel sheeting is completely destroyed. It seems likely that the shed will once again have to be re-roofed.

The Passenger Transport Executive said Police and Fire chiefs were investigating the cause of the blaze. He was quoted in the Isle of Man Examiner of 2nd October 1990, "It is a shame to have lost one of our cars. It was worth a lot to us. What price a vintage car ?"

No.22 was one of four "Winter Saloons" numbered 19-22 and which arrived as fully glazed and vestibuled saloon cars with transverse seating for 48 passengers. They are 37'-6" long and 7'-4" wide, the largest on the system and have formed the backbone of summer and winter traffic ever since delivery in 1899.

The MER is sadly no stranger to disastrous fires. On the night of Saturday April 15th 1930, losses were estimated to exceed Â£10,000 were incurred by a disastrous fire at Laxey Car Depot. Four motor cars, Nos. 3,4,8 and 24 together with trailers Nos. 34, 35, 38, 39, 40, 41 and 44, all three tower wagons, a mail van, tools and equipment were consumed by the flames. The cause was said to be a burning cigarette inside one of the cars put away.

Snaefell Car No.5 was destroyed by fire in 1970. It was subsequently rebuilt as a near replica, by Kinnin Bros. Of Ramsey. 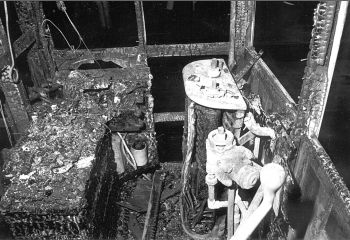 The Ramsey end switchbox, with the shell of the General Electric K11/12 controller, its top still shining to the end. It is next to one of the Westinghouse self lapping brake application valves, which had performed faultlessly throughout its life. No.22's controller handles including the beautifull… 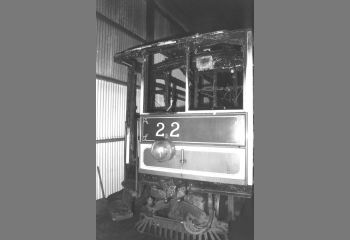 The Ramsey end dash panel of No.22, with its headlamp and whistle, and characteristically signwritten fleet number. 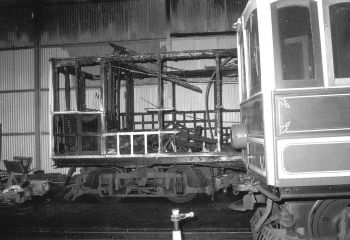 The remains of No.22's Ramsey end, makes a stark comparison to that of sister car No.19. The Brill 27Cx trucks are largely undamaged and will be built into the new 22. Hideously deformed is 22's trolley, arching down into the devastated saloon. 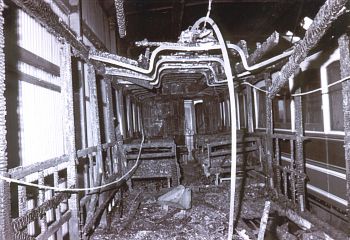 The remains of 22's passenger saloon.

The fire destroyed completely the contents of the Ramsey end saloon, now a complete wreck minus roof and with the trolley drooping down onto the remains of the saloon floor. 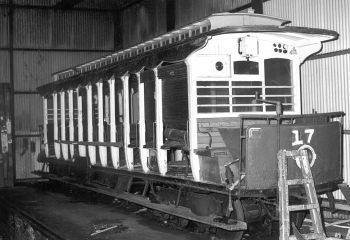 Also in the shed during the blaze was sister Car No.19, undergoing repairs and minus its Douglas end truck, and one time semi-permanent resident of the ‘Hospital Roads’, No.17, a Milnes crossbench car of 1898. Car 19 suffered minimal damage to the trolley, whilst No.17 which was alongside No.22 as… 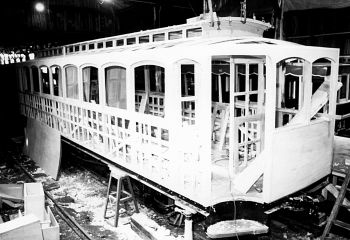 Work to contruct a replacement body for Car 22 was put out to tender in October 1990. The contract was awarded to McArd Contractors of Port Erin, the project consultant being former master carpenter Mr Eric Cleator. Following detailed examination of the surviving Winter Saloon Cars, plans were prod… 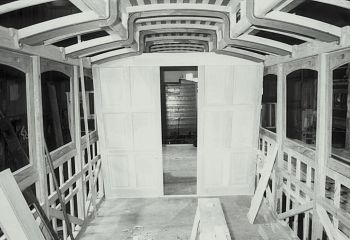 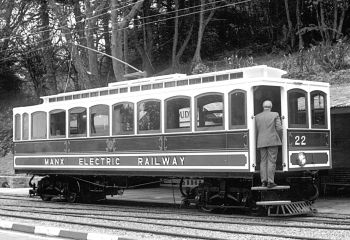 Rebuilt Car 22 resplendent at Groudle Station, on its inaugural press trip on May 13th 1992. Former Chief Engineer Mr Maurice Faragher is stood on 22’s Ramsey end steps. Scurrilous rumours still persist that the ‘new’ 22 is wider than its sisters and doesn't sit squarely on its underframe. (Photo:…

Photos, Line Drawings and Profiles of the MER's Fleet of Trams & Trailers.

Replica Winter Saloon Car 22 is shown at Brown's Crossing on a bright day in February 2003, North B…

Newley Overhauled Winter Saloon 22 was destroyed by fire on 30th September 1990. Read how this was…

Single line operation was often a feature of the Manx Electric Railway winter operation, as renewal…

Someone once commented 'there are very few trees on the Isle of Man', although anyone passing one o…

Car 22 taken at Ramsey Station on Saturday, November 3rd 2007. The car has just completed its daily…

Winter Saloon car No.22 propels Winter Trailer No.58 back to Derby Castle Depot on 20th March 2018.…