Merry Christmas and a Happy New Year from the Manx Electric Railway Society.

Car 5 which is operating the MER's winter service approaches Ballasholague on the 9th February 1996. Traces of snow are visible on North Barrule, the island's second highest peak. (Photo: MERS Collection) 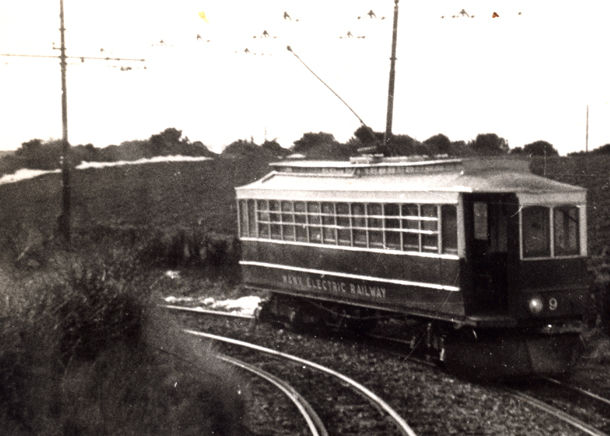 A suitably seasonal view of the MER. Photographs of the MER's snowplough in use are exceedingly rare. This view taken at Ballagawne in the late 1960s (believed to be the last occasion when the snowplough was used) shows the plough attached to the Ramsey end of Car 9 which was often relegated to works duties in the Winter. 9 was the only Tunnel Car not to be fitted Winter Trailer airbrake connections, with no such obstructions in the way and the entrance steps removed, the plough could be fitted easily and quickly as required. The plough when not required was usually to be found hanging from the wall in the old Laxey Depot, its current whereabouts is unknown.(Photo: A. M. Goodwyn)